Following the devastating earthquake that struck the coastal provinces of Esmeraldas and Manabí in Ecuador on April 16, 2016, Forell | Elsesser sponsored Senior Engineer
Mei Kuen Liu to join the EERI Learning from Earthquakes  Reconnaissance Team as the only practicing engineer from the US to observe earthquake damage, along with other international engineering researchers and practitioners.

The team arrived in Manta on May 9, and was grateful to have the cooperation of the Ministry of Urban Development and Housing (Ministerio de Desarrollo Urbano y Vivienda, or MIDUVI) and the generous support of the Ecuador Army Corp of Engineers in providing access, transportation, and local knowledge to assist in the reconnaissance trip. During the five-day trip, they were able to visit Manta, Portoviejo, Bahia de Caraquez, Canoa, Calceta, and Chone, including restricted areas of these locations and covering a wide range of structures and building types.

The very first Ecuadorian Construction Code was approved and published in February 2015. As such, most of the buildings in Ecuador were not designed to an approved national standard. Furthermore, many low-rise buildings (one to four stories) in the coastal areas were not designed by engineers. The most common structural system for mid- to low-rise buildings (between two and ten stories) is a reinforced concrete frame with unreinforced masonry infill walls, both for exterior façades and interior partitions. Most of these unreinforced wall panels are placed in between the structural frame columns but lack adequate in-plane or out-of-plane anchorage, or sufficient seismic separation, with the main structure. Many multistory buildings were observed to be very flexible, but lacked modern ductile detailing. It was commonly observed that pieces of façades fell to the ground and interior partitions developed large cross cracks or fell out-of-plane.

Wide-spread non-structural damage was observed in hospitals, while many of the main structural frames suffered limited damage. Unreinforced masonry wall debris became a falling hazard and an obstruction to egress for building occupants. In several instances, inadequately reinforced stair shafts were completely destroyed during the earthquake, obstructing the exit path, or collapsed due to the failure of brittle supports. In less serious but still dangerous situations, there were many cases of wall finishes such as tiles and thick mortar spalling, falling off, and obstructing means of egress. Non-structural elements such as ceilings, pipes, ducts, and ceiling-supported equipment also performed poorly, rendering the hospitals non-operational and requiring temporary facilities to be set up in prefabricated structures and tents.

The following photos show some “before and after” views of damaged buildings in Manta.  The “after” photos were taken by Mei Kuen Liu. 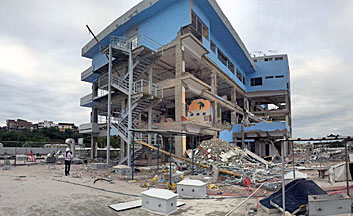 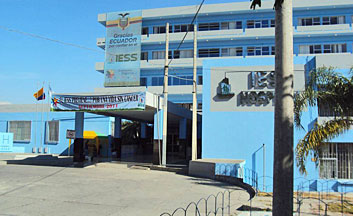 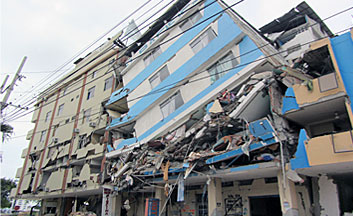 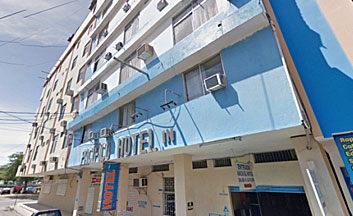 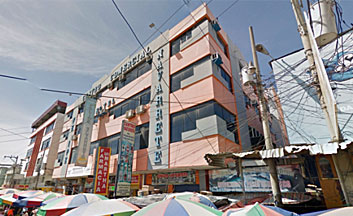 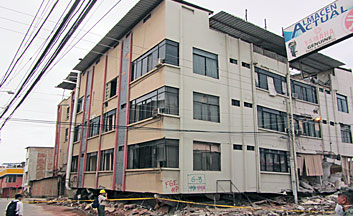 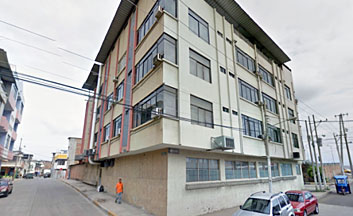